At the airport of Manchester Holger Mende, Treasurer of ICCD, was warm welcomed of Barry David, president of the English Deaf Chess Association (EDSA) and Steve Gibson, Secretary of the EDSA.

In Manchester currently live approximately 530,000 inhabitants. The industrial revolution began here in 1786, and the world’s first steam-powered textile factory was built. As early as 1761 the 56 km long shipping channel from Liverpool, which was an important port for the import of cotton to Manchester was built and in 1830 the oldest two-track railway line between the two cities came into operation. The transformation from the industrial age to a modern, livable city can now be viewed free of charge in the Museum of Science & Industry in the Castlefield district. In addition to the modern infrastructure, the integration of the old industrial factories into the historical buildings, canals, bridges, the Roman fort and the modern houses at the port will be presented.

From the airport, there is a fast train ride to the center of Manchester Oxford Road, about 15 minutes. From there are 3 stops with the double-decker bus to the Manchester Deaf Center (MDC). Alternatively, the MDC or the overnight accommodation “Denmark Road” can be approached immediately from the airport by bus line 43 in about 45 minutes.

I have visited the accommodation of the players in the central university area “Stanstcuary Students Denmark Road” 12 Denmark Road with 6 floors and elevators.

It is suitable for 1 team, each team in a closed residential unit with 4 – 6 own rooms, common living area and a fitted kitchen with cooking place, refrigerator and dining. In each closed room is a queen bed, shower and WC, a desk, closet for 1 person. In this accommodation, a team of 4-6 people can be accommodated together. Nearby there is a cheap LIDL supermarket with integrated bakery for shopping as well as breakfast.

Right next to it, there are other snack bars. From the MDC it is 15 min, about 0,7 mile = 1100 meter south direction min walk or take the bus to the accommodation.

In addition to Stanstcuary Students Denmark Road, we also visited the *** Hotel Pentunum, Sackvilla Street, 0,6 mile = 900 meter north of the MDC or a 13 min walk. Each room is equipped with shower, coffee / tea making facilities, TV. We also visited the ICCD congress hall with the hotel staff.

The main focus was particularly on the verification of the appropriate playground. The MDC has very spacious rooms for all single tournaments

We also agreed with the chairman of the Manchester Association, Mr. Richard Junes, that the first floor will provide a space with all the prerequisites for the work of the ICCD Presidium and EDCA team.

It was also recommended to carry out the 39th ICCD Congress 2018 in the MDC. Optimal conditions with large room on the ground floor are available. In the MDC there is a cafe with snack and drinks, sufficient for all participants. B. David, S. Gibson and H. Mende led extensive discussions.

In the north of MDC there are many attractions in the city center. Particularly recommended are the National Football Museum, the Cathedral of Manchester and many other interesting objects such as the market street and large department stores. The free “MetroShuttle” service bus nos. 1,2 and 3 for the sightseeing of the city center with stops at the sights is particularly useful. Great recommendation for all participants. On the day off, interesting excursions to Brüxen to the national park. There the typical English landscapes can be visited.

The host currently has 3 locations for the presentation ceremony and the final banquet. This decision is still pending.

In free time, H. Mende had the opportunity to meet Mr. Michael Freund, ICCD of Friends. President in Manchester. The ICCD of Friends should cooperate more closely in the future. We talked about different ideas and measures to collect more donations.

The impressions of Manchester H. Mende collected with photos and personally in the city center. I was very supported by Barry David and Steve Gibson. For the friendly welcome, the good conversations and hospitality i would like to thank you so much, also in the name of the ICCD.

I surely recommend the place for the participants of the Deaf Chess Olympiade 6.-16. July 2018 in Manchester. It will be an unforgettable experience. 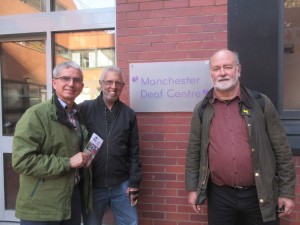 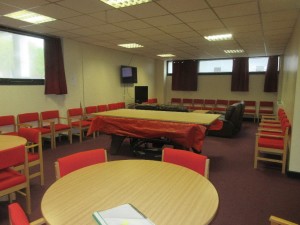