Aug02 Comments Off on Memory of Milorad NIKOLIC 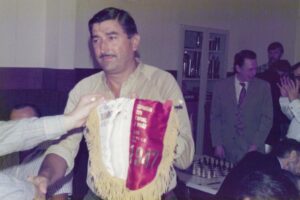 MILORAD NIKOLIĆ, was born in 1933 in Kruševac, and died on May 5, 2021 in Belgrade. At the age of seven, he overcame meningitis and lost his hearing. He studied at the School for the Deaf in Jagodina, and the locksmith trade in Kragujevac at the Zastava Military Technical Institute.

After passing the exam, he remained to work in “Zastava” until 1954. He showed extraordinary success and commitment at work, and then he was declared a striker five times and rewarded with money. Thanks to his work, the door is open for other deaf people in this institution. During his stay in Kragujevac, he actively joined the Subcommittee for Western Serbia and cooperated with the then president Boško Milekić, so that in 1953 Milekić was sent to Montenegro to organize the work of the Alliance, Nikolić served for almost a year. – fiancé of the Alliance for Western Serbia.

During that time, Nikolic founded a football club for the deaf, was his coach and player, participated in the construction of the Banja Luka-Doboj railway and worked for four months on the construction of a school for deaf children in Zemun. When leaving Kragujevac, Nikolic received a plaque and a charter as a sign of gratitude for his work in Kragujevac.

From 1954 to 1957, Nikolić worked at the Shipyard in Rijeka. He met many deaf people in the city who were disorganized. With the experience from Kragujevac, he stabilized the work of the organization and at the first assembly he was elected president of the organization. At that place, he fought for the City to get decent premises, as well as material means for the work of the organization. He founded the football club “Galeb” in Rijeka, and was its coach and player. “Galeb” took the second place at the first football championship of the deaf in Croatia. His work was noticed, so in 1955 he was elected a member of the Presidency of the Association of the Deaf in Croatia, and he spent two years there. Due to his marriage, he left Rijeka and came to Belgrade in 1957. At the farewell, he received a letter of thanks from the Assembly of the City of Rijeka and a plaque of the Association as a sign of gratitude for his work so far. He was the president of the “Olimpija” Sports Club for thirty years, and he led the football club for ten years. At the same time, he was very active in chess, he was its president and coach. He is the champion of Belgrade in chess more than fifteen times, once he won the second, and once the third place in chess at the world championship for individuals. As a team, the chess club “Olympia” was four times world, five times European, twice second in Europe, and once they took third place. He has been working in KUD “Radivoj Popović” since 1958, he is especially engaged in the drama section. He has been working in KUD for almost thirty-eight years, and he is almost always the leader of the society’s travels around the country and abroad. 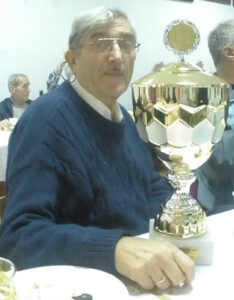 For his work on the social level, he was awarded the Order of Labor with Silver Rays, the Order of Merit for People with Silver Rays, he received the gold badge “Master of Sports” from SOFK Yugoslavia, three gold plaques from SOFK Belgrade, and the Football Association. Belgrade silver plaque, monetary award of the Youth Organization of the City of Belgrade, numerous praises of the Association for Sports and Recreation of the Disabled of Yugoslavia, Serbia and Belgrade, the charter of the Association of the Disabled of Serbia, etc. Among the international recognitions, it should be mentioned that US President Reagan gave him a “silver Olympic dollar” for his success at the World Chess Championship for the Deaf, when he won second place in the world.